Malaysia Has Had 3 Prime Ministers in 2 Years. What Happened? - Politically Corrects 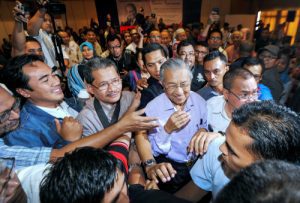 Malaysia Has Had 3 Prime Ministers in 2 Years. What Happened?

Malaysia’s political scene has been by far a dramatic one for the past 3 years. From corrupt leaders to powerful, moving displays of power and unity done by opposing political parties has shown the world, they ought to tune into the Malaysian politics often.

So, unlike other countries, Malaysia has had 3 Prime Ministers in over 2 years. How is that possible you ask? Well, the answers to that perplexes us Malaysians as well. But let us break it down.

It all started in 2018 when Former Prime Minister Najib Razak was in charge. He was prime minister from 2009 to 2018. Unfortunately, he had to step down as he was involved in a huge corruption scandal that rocked the nation to its core. The financial scandal showed that he was suspected for embezzling funds from the 1MDB.

So when the 2018 elections came by, it was a no brainer that he lost. And the person who took his place was none other than former prime minister Dr. Mahathir who was the longest running leader in Malaysia. He ran for a whopping 22 years.

So when Dr. Mahathir took over, he was already 92 years old making him the oldest serving Prime Minister in 2018. He made quite the headlines as it was a shock when he came out of retirement. In 2020, he decided to make another shocking announcement. He decided to quit rather abruptly with reasons unknown and was appointed interim Prime Minister from January 2020 March 1st 2020.

Finally, in the year 2020, a new Prime Minister that goes by the name of Muhyiddin Yassin was appointed.

He was appointed by the King to be the Prime Minister after the country was wrapped in political crisis. He is also the first person to be Prime Minister while holding a parliamentary and state seat at the same time.